Posted on February 3, 2015 by theartofkitchens

It’s February and brrr, this weather just isn’t letting up – in fact, judging from the view outside the snowy season is finally upon us. One thing it’s perfect for is digging into a film or two and if there’s one thing cinema manages to portray beautifully… its kitchens. We’ve made a short list of our favourite kitchens in film, you may expect these all to be designs of exquisite beauty but that would be shallow. We’ve picked these for their role in the story, their aesthetics and their memorability.

Whatever you may think of it as a piece of entertainment, Gosford Park is a cinematic wonder that beautifully illustrated the class system in 1930s period Britain. Set in a magnificent country estate, the film offers a contrasting insight into the lower class cooks and the pompous excess of its wealthy guests.  The kitchen sequences are a dark and claustrophobic as the chef’s clamour to provide a feast fit for their illustrious guests. The key juxtaposition is the wonderful china, silverware and crockery they use to prepare the food – fit for the upper classes maybe but not for them.

“Listen to me, listen to me! There are things in there, there’s a tea bag growing! You haven’t slept in sixty hours; you’re in no state to tackle it. Wait till the morning, we’ll go in together”….. …“This is the morning, stand aside!” and thus begins the seminal cult comedy Withnail & I as two aspiring actors living in 1969 London squalor awake from their drug induced slumber to tackle the washing up. Paul McGann and Richard E. Grant approach the fungal engulfed sink in apprehension, declaring horror at the ‘matter’ in the sink. It’s an iconic scene from a timeless film and this kitchen is a great metaphor for their debauched lifestyle, making us chuckle every time we think of it. 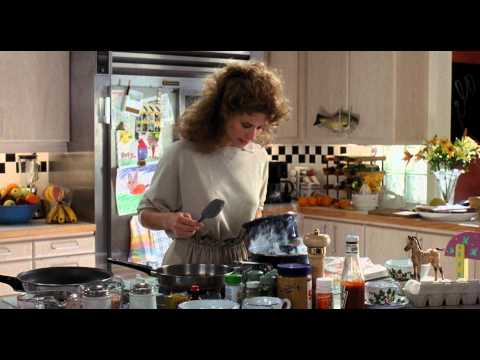 Bit of a subversive choice here. This ticklish early 1990s comedy sequel stars Ted Danson, Tom Selleck and Steve Guttenberg as three haphazard men raising a young girl who turned up on their doorstep some years past. The mother is a mainstay on the scene now and one of her key quirks is her ghastly cooking. Much of the films early scenes take place in the ‘family’ kitchen and plays host to her frequent kitchen horrors. We’ve picked it as it’s a perfect example of early 90s open plan architecture – spacious, clinical and still very contemporary. After the explosion of minimalism in the 1980s that came with the economic boom (and yuppie culture), this arid modernism became extremely popular in mainstream culture. It seems like we are only now reverting back to more vintage designs but it’s nice to see its origins on film.

What are your favourite movie kitchens? We avoided the obvious choices like ‘It’s Complicated’ and ‘Father of the Bride’ but we totally understand we’re your coming from if those are your choices.